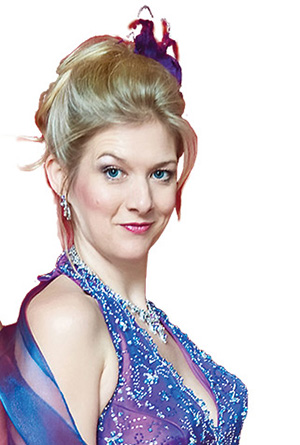 Background: Born and educated in the UK, Fiona was awarded a First for a BA (Hons) in Music (major), Theatre Studies & English Literature; has a Postgraduate Diploma of Vocal Studies (Trinity College of Music, London) and a Master’s in Public Relations. A past member of the National Youth Theatre (UK) and British Actors Equity, and Scholar on contract at St Martin In The Fields, Fiona has performed at the Royal Albert Hall, The Barbican, and The Wigmore Hall, Southbank as well as touring to Europe including Vienna, Spain, Ibiza, and now the Asia Pacific region.

WA Opera Repertoire: Fiona joined West Australian Opera as a chorus member in 2002 and has sung in over 30 productions, the highlight of which was with Dame Kiri Te Kanawa (2006) and as a soloist for WA Opera’s Opera in Education program (2009). In 2014, Fiona understudied The Queen of the Night (The Magic Flute 2014). Most recently Fiona performed five cameo ensemble roles in Sweeney Todd.

DivaLicious Opera: Launched at the Ellington Jazz Club in Sept 2011, DivaLicious - a soprano duo with a comic twist, received national recognition as finalists on Australia's Got Talent 2012 and also appeared on The Voice (2014). With TV and media appearances including The Morning Show and Today Tonight, Divalicious was the Opening Act for "Highway to Hell" AC/DC, Perth Festival March 2020 - at the Canning Bridge overpass to 100,000 people incl Premier and official party, featured on all news channels.

Nominated for Best Cabaret at Fringe World Festival, DivaLicious have written and produced five cabaret shows, touring regionally, booked nationally, and performing as guest artists on luxury cruises in Asia Pacific Region. Three shows were performed at Sydney Opera House (2015, 2016 & 2017) where they received full standing ovations, sold out performances and great reviews. DivaLicious are also a popular headline act at private and corporate functions with highlights from their shows and have performed at The Ashes 2013 & 2017; The Hopman Cup, and Hall of Fame. They have also produced their own CD “Divalicious – One Voice”.

Prior to starting DivaLicious, Fiona formed Cabaret Cadenza an ensemble of classical singers singing highlights from opera, musical theatre and cross-over songs for concert and events.

In the meantime, Fiona is having a #DivaLiciousOpera ball performing with Penny as they try to out do each other with their voices, wit and charm whilst conjuring up new shows for you – our fabulous Divalicious audience!