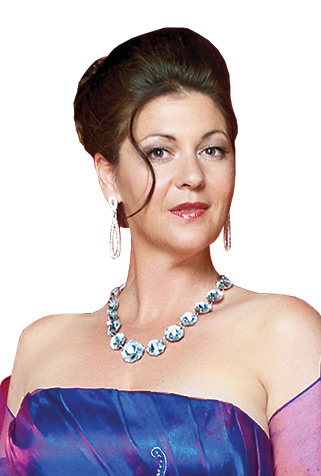 (Soprano, Founder and Producer of Daisy Productions and DivaLicious)

Penny was born in England with a good pair of lungs and a penchant for showing-off, so becoming an opera singer seemed an obvious career choice. Not feeling fat enough or serious enough to start, however Penny first became singer in a jazz band. She spent her teenage years receiving marriage proposals from inebriated men in bars and the occasional indecent proposal from dubious individuals describing themselves as ‘in show-business’, the most memorable of whom turned out to own a dog that had appeared in a television commercial.

Fun as this was Penny felt that maybe jazz wasn’t for her long term so she branched out into musical theatre. She sang Memory at a school concert, dressed as a cat, appeared as Sandy in Grease in...a cat suit...and Gymnasia in A Funny Thing Happened on the Way to the Forum wearing only a yellow bikini, causing quite a stir in Wallingford market place.

Concerned that she was becoming type cast at such a young age, Penny finally gave in to the inevitable and decided to study classical singing. Whilst playing her first role, Zerlina in Don Giovanni she fell in love, not only with the man singing opposite her but also with Mozart’s music and opera in general and knew she was headed for life as a Prima Donna.

Penny’s first singing teacher lived in Oxford so, when her parents suggested that a degree might come in handy one day, she applied to Oxford University and read Human Sciences as an undergraduate with a lot of singing on the side, miraculously passing with a 2.1. This has indeed turned out to be an extremely useful qualification, Penny learnt an immense amount about an awful lot of ‘ologies’ and is, consequently an invaluable addition to any cocktail party; she is also unbelievably hard to argue with and quite impossible to shock.

On graduating from Oxford Penny packed up her mortarboard and sparkly hot pants and moved to London with a list of ambitions. She was determined to sing the title role in La Traviata, have a top 40 single, appear on a poster on the London Underground, star in a film, have a role in a West End Musical and generally have a fabulous time. She completed her wish list in a few years with seemingly little effort and has since regretted not putting “secure world peace”on there too.

Having exhausted London, and indeed Europe, she moved to Australia where she has been creating new people, four of them to date. On finding children bewilderingly time consuming Penny put her career as a soloist to the side and auditioned for the WA Opera chorus where she has been contentedly languishing in the back row (OK, often in centre front!) for the last decade. Working as a chorister she met Fiona, a beautiful blond soprano with a head for business and spectacular voice; AKA Penny’s worst nightmare. Initially the girls eyed each other with suspicion but soon realised that they were kindred spirits, delighting in all things theatrical and musical and both determined to fight their way out of the kitchen singing all the way!

After more than a few glasses of champagne, a number of hissy fits and much hilarity DivaLicious was born. It is time for Fi and Penny to step back into the spotlight. DivaLicious has arrived!

To read Penny's proper professional biography; with more detail and less silliness please click on the link below.